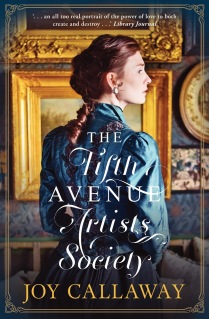 Author // Joy Callaway
Publication Month // December, 2016
Publisher // Allen & Unwin
Australian RRP // $29.99 AUD
Genre // Historical Fiction
synopsis.
Devastated after being jilted by the boy next door, Ginny Loftin turns to writing in an attempt to rewrite their story with a better ending. But it is among the painters, musicians, actors and other writers she meets at a Fifth Avenue salon that she finds new purpose and a second chance at love. A richly told historical novel of family loyalties, loss and artistic desires.
‘The creative sisterhood of Little Women, the social scandal of Edith Wharton and the courtship mishaps of Jane Austen . . . The Fifth Avenue Artists Society is a delightful, and at times touching, tale of Gilded Age society and creative ambition with an inspiring heroine.’ New York Daily NewsThe Bronx, 1891. Virginia Loftin, the boldest of four artistic sisters in a family living in genteel poverty, knows what she wants most: to become a celebrated novelist despite her gender, and to marry Charlie, the boy next door and her first love.When Charlie instead proposes to a woman from a wealthy family, Ginny is devastated; shutting out her family, she holes up in her room and turns their story into fiction, obsessively rewriting a better ending. Though she works with newfound intensity, literary success eludes her-until she attends an elite salon hosted at her brother’s friend John Hopper’s Fifth Avenue mansion. Among painters, musicians, actors, and writers, Ginny returns to herself, even blooming under the handsome, enigmatic John’s increasingly romantic attentions.But just as she and her siblings have become swept up in the society, Charlie throws himself back into her path, and Ginny learns that the salon’s bright lights may be obscuring some dark shadows. Torn between two worlds that aren’t quite as she’d imagined them, Ginny will realise how high the stakes are for her family, her writing, and her chance at love.
(Allen and Unwin)
review.
The Fifth Avenue Artists Society is a historical fiction story set in 1891, The Bronx. It is a beautiful written look at the literary and artistic society in New York during this time, with characters who are striving to cultivate and share their talents.
We meet the protagonist, Virginia Lofton, as her childhood sweetheart proposes to another woman in front of her leaving her heartbroken. Her family seek to console her, and encourage her to dive into her writing to move on. Each of her siblings, bar one, is artistically inclined – whether it be writing, painting, music, or millinery – and they’ve been encouraged their whole life to pursue their interests, despite the financial strain their family has been under since their death of Ginny’s father. Her brother, in particular, seeks to distract her by inviting her to attend a meeting of artistic minds at John Hopper’s apartment on Fifth Avenue. For a time, this does help Ginny to cope and to pursue her career as a published author, but over time she begins to notice that not everything is as it seems.
While I will readily confess to not being overly familiar with this time period in American history, or even in literary history, I thought that Joy Callaway was very clever in including prominent artistic creators in small ways within her story, such as Edith Wharton and Oscar Wilde. It helped to ground the story within the chosen time period and set the tone for the story.
I was also pleased with the way Callaway showed the role of women within society – both Ginny and her sister, Alevia, struggle to be accepted as authors or musicians (respectively) in fields traditionally dominated by men. As a reader I felt the frustration of both girls as they constantly try to break down the barriers to succeed in the face of society’s expectations and perceptions of their families.
I struggled to reconcile Ginny’s relationship with Charlie, the childhood sweetheart who chooses to marry for money rather than love, particularly the way that neither of them can move on. Given the time period and propriety, there are aspects of their interactions that seem a little out of place, and that did draw me out of the story at times.
I did enjoy the twist that occurs about two-thirds in the story; it’s something that begins to bubble away between the lines early on in the story and the anticipations builds beautifully.
Overall this was a satisfying story, beautifully told, that provided the author’s insight into a time period that I was not familiar with. It prompted me to look up some of the names of characters and publishing houses and learn a little of their histories.
I gave The Fifth Avenue Artists Society 4 out of 5 stars.

I received a copy of The Fifth Avenue Artists Society from Allen & Unwin in exchange for a fair and honest review. All thoughts and opinions are my own.