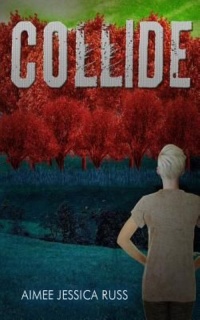 synopsis.
This must be a dream after all. I pinch myself.
“Ouch.”
Why the hell aren’t I waking up?
After mysteriously waking up on a different planet, not knowing how she got there or even her name, K – as she becomes known – finds herself in a fascinating world much different to the one she can barely remember. K becomes part of an Exodian family and begins to feel at home on the beautiful, peaceful planet known as Exodus. That is until her new world is turned upside down. Can K be brave enough to stand up to the enemy and help her new family save their planet?
(Good Reads)
my thoughts.
I don’t think I’ve ever written a book quite like Collide, and while it’s not going to make my top books of 2016, it’s definitely a unique and interesting read and not at all what I expected.
‘K’ wakes up on a strange planet with no memory of who or where she is. It’s quickly apparent that she’s not from this planet – Exodus – and that the people who call the planet home are built very differently to herself. The Exodians live in communities that work together to provide for one another. They have a simple lifestyle, that relies on trust and some very interesting social constructs.
While she is welcomed into one family, there are conflicts with members of the community who consider K – an alien stranger – to be a danger, potentially a spy of another race who has been threatening to invade Exodus and take its resources for its own.
There’s a lot that happens in this book, but there are huge lulls in action. We learn a lot about this very intriguing world and it’s inhabitants, and yet there are so many questions unanswered that would have just fleshed out this world so much more. It has such promise and is so different to any other fictional world I’ve read about, I would have liked just a little more.
The writing style is also very different and at times, it was hard to read and I had to push myself through it; at other times, I couldn’t put it down, so I would encourage people to persist with it, especially in the beginning.
K and the Exodian characters are all very interesting and unique, too, and the cliffhanger ending has left room for them to fully develop in a follow-up book.
Overall I gave Collide 3 out of 5 stars.
title // The Recall Saga #1: Collide
author // Aimee Jessica Russ
publisher // Olympia Publishers
genre // Science-Fiction
publication date // January, 2016
format // Paperback