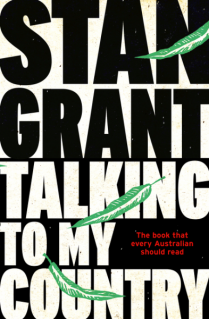 synopsis.
An extraordinarily powerful and personal meditation on race, culture and national identity.
In July 2015, as the debate over Adam Goodes being booed at AFL games raged and got ever more heated and ugly, Stan Grant wrote a short but powerful piece for The Guardian that went viral, not only in Australia but right around the world, shared over 100,000 times on social media. His was a personal, passionate and powerful response to racism in Australian and the sorrow, shame, anger and hardship of being an indigenous man. ‘We are the detritus of the brutality of the Australian frontier’, he wrote, ‘We remained a reminder of what was lost, what was taken, what was destroyed to scaffold the building of this nation’s prosperity.’
Stan Grant was lucky enough to find an escape route, making his way through education to become one of our leading journalists. He also spent many years outside Australia, working in Asia, the Middle East, Europe and Africa, a time that liberated him and gave him a unique perspective on Australia. This is his very personal meditation on what it means to be Australian, what it means to be indigenous, and what racism really means in this country.
TALKING TO MY COUNTRY is that rare and special book that talks to every Australian about their country – what it is, and what it could be. It is not just about race, or about indigenous people but all of us, our shared identity. Direct, honest and forthright, Stan is talking to us all. He might not have all the answers but he wants us to keep on asking the question: how can we be better?
(Good Reads)
my thoughts.
This is a book that every Australian definitely needs to read.
It’s not an easy read – there are a lot of confronting and heart-breaking truths that Stan Grant highlights through a series of personal reflections on key moments and events in his life. He openly discusses his struggles as an Indigenous man living in a country like Australia which has done little to understand the indigenous population.
Australia’s history is full of shameful acts towards our indigenous people, and most of us know the facts and statistics around lower-life expectancy, poorer outcomes healthy-wise and academically. What Stan Grant does in his book is take those facts, discuss them, but explores them within the context of a what it means to be an Aboriginal in the current day.
It is not a quick read; each and every page brings with it something to reflect upon. It’s not a book of answers to problems that have plagued this country, but it is a challenge to everyone to think about the way Australia address indigenous issues as a country and at an individual, personal level. It’s a challenge to recognise that life is not as simple as it might seem on the surface.
I highly recommend this book to every Australian, and every person with an interest in Australian history.
I rated Talking to My Country 5 out of 5 stars.
title // Talking to My Country
author // Stan Grant
publisher // Harper Collins Australia
genre // Non-Fiction, Indigenous Australia
publication date // March 2016
format // Hardback