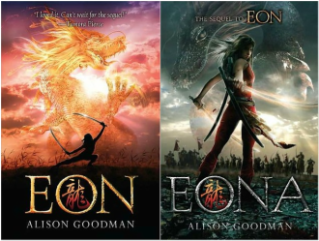 synopsis.
Swordplay, dragon magic–and a hero with a desperate secret
Twelve-year-old Eon has been in training for years. His intensive study of Dragon Magic, based on East Asian astrology, involves two kinds of skills: sword-work and magical aptitude. He and his master hope that he will be chosen as a Dragoneye–an apprentice to one of the twelve energy dragons of good fortune.
But Eon has a dangerous secret. He is actually Eona, a sixteen-year-old girl who has been masquerading as a boy for the chance to become a Dragoneye. Females are forbidden to use Dragon Magic; if anyone discovers she has been hiding in plain sight, her death is assured.
When Eon’s secret threatens to come to light, she and her allies are plunged into grave danger and a deadly struggle for the Imperial throne. Eon must find the strength and inner power to battle those who want to take her magic…and her life.
(GoodReads)
my thoughts.
This book duology was an absolute delight to read. It is a wonderful fantasy story that blends East Asian astrology with dragons and amazing characters.
Sixteen year old Eon has been training to become a Dragoneye for years, hiding a remarkable secret – he is actually a she. Traditionally, Dragoneyes can only be males, with females forbidden to use Dragon Magic, and her deception could ultimately lead to her death, and the death of those who have kept her secret.
What follows is a fantastic adventure that is steeped in danger as the world that Eona knows is turned upside down amidst the struggle for the Imperial Throne. She must identify friends and foes, come to understand her magic and how it works in order to survive.
I love that this duology features a strong, female character. While Eona doesn’t always make good choices, she faces the consequences of all her actions and tries to become stronger for it. There are a whole host of supporting characters who make this a wonderful read, but ultimately the stars of this book are the dragons who are now one of my favourite depictions of dragons in literature. Their magic, and their ties to the Dragoneyes, is entirely unique and wonderful.
While the first book, Eon, sets the stage, the second book, Eona, takes all that set-up and runs away as everything leads to a thrilling climax. I finished reading Eon, picked up Eona, and I didn’t stop reading until I reached the end, and I was absolutely breathless when I got there.
I highly recommend these two books to any fantasy lover. I rated Eon 4 out of 5 stars and Eona 5 out of 5 stars.
title // Eon and Eona
author // Alison Goodman
publisher // Viking Books
genre // Young Adult, Science Fiction & Fantasy
publication date // December 26, 2008
format // Paperback