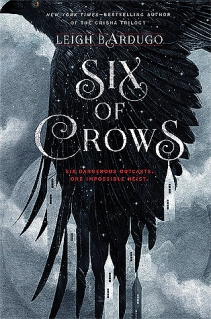 synopsis.
Ketterdam: a bustling hub of international trade where anything can be had for the right price—and no one knows that better than criminal prodigy Kaz Brekker. Kaz is offered a chance at a deadly heist that could make him rich beyond his wildest dreams. But he can’t pull it off alone…
A convict with a thirst for revenge.

A sharpshooter who can’t walk away from a wager.

A runaway with a privileged past.

A spy known as the Wraith.

A Heartrender using her magic to survive the slums.

A thief with a gift for unlikely escapes.

Kaz’s crew are the only ones who might stand between the world and destruction—if they don’t kill each other first.
(Good Reads)
my thoughts.
Six of Crows is a much-beloved YA fantasy novel that takes place in Leigh Bardugo’s Grisha universe, albeit with a completely different set of characters.
This book has a relatively large main cast – all of whom have chapters told from their perspective – of six, beginning with our anti-hero leader, Kaz, who is perhaps the most intriguing of them all. Kay is one of those characters who is always five steps ahead of everyone else and leaves you guessing as to what will happen next. All the characters are strong, interesting and unique, and a pleasure to read. There are moments of romance, but it’s subtle and natural and blends in seamlessly with everything else that’s happening.
While I found the first part of the book a little slow to get into, as Bardugo introduces us to the players and the world (for those unfamiliar with the Grisha Trilogy’s world), once the plot started moving along the pace picked up and I was swept up into the world of Kaz’s planned heist. There were twists and turns along the way, many of them unexpected, that left me having mild moments of  panic about what was going to happen to the characters I’d become so invested in. The ending left me in shock, and with little doubt that I would be purchasing and reading Crooked Kingdom when it was released to find out what where the characters will go to from there.
Overall, Six of Crows was a solid read, with great, well developed characters and an intriguing plot. I rated it 4 out of 5 stars.
title // Six of Crows #1: Six of Crows
author // Leigh Bardugo
publisher // Henry Holt & Co
genre // Young Adult, Fantasy
publication date // September 2015
format // Paperback