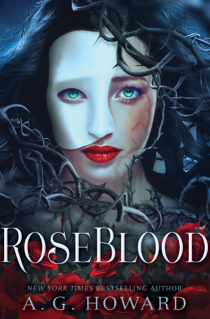 synopsis.
In this modern day spin on Leroux’s gothic tale of unrequited love turned to madness, seventeen-year-old Rune Germain has a mysterious affliction linked to her operatic talent, and a horrifying mistake she’s trying to hide. Hoping creative direction will help her, Rune’s mother sends her to a French arts conservatory for her senior year, located in an opera house rumored to have ties to The Phantom of the Opera.
At RoseBlood, Rune secretly befriends the masked Thorn—an elusive violinist who not only guides her musical transformation through dreams that seem more real than reality itself, but somehow knows who she is behind her own masks. As the two discover an otherworldly connection and a soul-deep romance blossoms, Thorn’s dark agenda comes to light and he’s forced to make a deadly choice: lead Rune to her destruction, or face the wrath of the phantom who has haunted the opera house for a century, and is the only father he’s ever known.
A. G. Howard brings the romantic storytelling that Splintered fans adore to France—and an entirely new world filled with lavish romance and intrigue—in a retelling inspired by a story that has captivated generations. Fans of both the Phantom of the Opera musical and novel, as well as YA retellings such as Marissa Meyer’s Cinder, will devour RoseBlood.
(Good Reads)
my thoughts.
I love a good retelling and re-imagining of a well-known story, and RoseBlood was a delight to read from start to finish. While I only know the story of The Phantom of the Opera from the film, A.G. Howard brilliantly weaves in the history of the story into her narrative to suit the needs of her own book, which is a wonderful mix of young-adult, fantasy and paranormal genres.
The highlight, as with other A.G. Howard books, is the style and tone of the writing, which is a beautiful and easy to read. I was gripped by the story from the first chapter and couldn’t stop turning the pages. There are multiple viewpoints in this novel, but there is nothing jarring in the change of perspective; both characters’ tell their sides of the story, moving the plot from one point to the next, adding detail that the other can’t provide.
The characters were wonderful. Rune and Thorn are both likeable, surrounded by supporting characters that help shape them and their stories. There’s a wonderful mix in character traits, too. From sweet to naive to deadly and dangerous, every one seems real, especially given the setting of an arts conservatory dedicated to training future performers. There’s a competitiveness in the background that adds to the realism.
I also loved the paranormal aspects in the story, which I wasn’t expecting. I can’t say much about them – that would ruin the story for future readers – but they were the highlight of the novel for me, and once their true nature was revealed I had to know how the story would end.
I rated RoseBlood 4 out of 5 stars. A really compelling read that I can’t wait to own when it’s released on January 10, 2017.
title // RoseBlood
author // A.G. Howard
publisher // Amulet Books
genre // Young Adult, Fantasy, Paranormal
publication date // January 10, 2017
format // Paperback
I received a copy of this book in exchange for a fair and honest review from the publisher via Netgalley. All thoughts and opinions are my own.