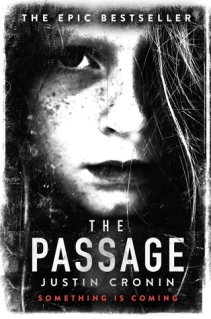 synopsis.
Amy Harper Bellafonte is six years old and her mother thinks she’s the most important person in the whole world. She is.
Anthony Carter doesn’t think he could ever be in a worse place than Death Row. He’s wrong.
FBI agent Brad Wolgast thinks something beyond imagination is coming. It is.
Unaware of each other’s existence but bound together in ways none of them could have imagined, they are about to embark on a journey. An epic journey that will take them through a world transformed by man’s darkest dreams, to the very heart of what it means to be human. And beyond.
Because something is coming. A tidal wave of darkness ready to engulf the world. And Amy is the only person who can stop it.
(Good Reads)
my thoughts.
The Passage was a slow-burn read for me. I won’t lie – it took me a while to read through different parts of the book, but I’m glad I stuck with it because ultimately, it is a really interesting read.
This story is huge. Not just physically (the story itself is nearly 1000 pages long) but also in terms of storytelling. The story spans nearly 90 years of history as the world is irrevocably changed by the introduction of vampire-like creatures.
Ultimately, the story is about the characters. Every character is developed in great detail, with snapshots and insights given into their lives, which at times slows the pace of the book, but does add an extra dimension to the book that it might not otherwise have while giving the reader something to invest in. While there were parts that that dragged, they were preceded and followed up by faster-paced narrative that helped moved the plot forward.
I gave The Passage 4 out of 5 stars. I can’t wait to read the follow up books The Twelve and The City of Mirrors.
title // The Passage #1: The Passage
author // Justin Cronin
publisher // Orion Publishing Co.
genre // Fantasy, Thriller
publication date // June, 2011
format // Paperback