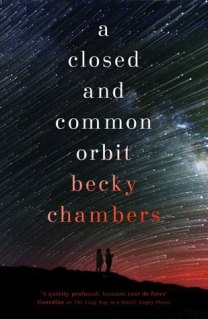 synopsis.
The extraordinary new novel by Becky Chambers, author of The Long Way to a Small, Angry Planet, called by Ann Leckie ‘great fun!’
Lovelace was once merely a ship’s artificial intelligence. When she wakes up in an new body, following a total system shut-down and reboot, she has no memory of what came before. As Lovelace learns to negotiate the universe and discover who she is, she makes friends with Pepper, an excitable engineer, who’s determined to help her learn and grow.
Together, Pepper and Lovey will discover that no matter how vast space is, two people can fill it together.
The Long Way to a Small, Angry Planet introduced readers to the incredible world of Rosemary Harper, a young woman with a restless soul and secrets to keep. When she joined the crew of the Wayfarer, an intergalactic ship, she got more than she bargained for – and learned to live with, and love, her rag-tag collection of crewmates.
A Closed and Common Orbit is the stand-alone sequel to Becky Chambers’ beloved debut novel The Long Way to a Small, Angry Planet and is perfect for fans of Firefly, Joss Whedon, Mass Effect and Star Wars.
(Good Reads)
my thoughts.
A Closed and Common Orbit is a simply stunning read.
The Long Way to a Small Angry Planet is one of my favourite books which left me starting A Closed and Common Orbit with high expectations, and Becky Chambers did not disappoint. This story is a lighter, easier read and consists of two parallel stories told in alternating chapters – one set in the present day and one in the past – that eventually converge. It’s the story of what it means to be alive and how to live in new, strange worlds.
Chambers’ writing style is beautiful to read. Her science-fiction worlds are built with honesty and compassion and the stories are driven by the characters who are engaging and well-rounded. There are a few characters in this book whom we met in the first, as well as a host of different species that we’ve met before, but this book delves much deeper into some of the ones that we only began to learn about previously. Chambers has created a host of species – physical traits, cultural practices and all – that would be fascinating to meet.
Chambers weaves a wide range of philosophical topics into this story, choosing the contexts so well that I was left sitting and thinking on them (and their implications) for a long time.
This book is a companion book to the first, although while you could read it without reading The Long Way to a Small Angry Planet, I would recommend reading the first book before starting A Closed and Common Orbit to get the full experience. You won’t be disappointed. I would happily read many more stories set in this universe and I look forward to seeing what Becky Chambers writes next.
I gave A Closed and Common Orbit 4.5 out of 5 stars. It will be released on October 25, 2016.
title // A Closed and Common Orbit
author // Becky Chambers
publisher // Hachette Australia
genre // Science-Fiction
publication date // October 25, 2016
format // Paperback
I received a copy of this book in exchange for a fair and honest review from the publisher via Netgalley. All thoughts and opinions are my own.