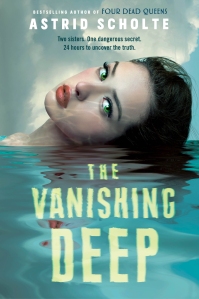 I received a copy of The Vanishing Deep from the publisher in exchange for a fair and honest review. All thoughts and opinions are my own.

Astrid Scholte, bestselling author of Four Dead Queens, brings fans a thrilling new standalone YA fantasy where the dead can be revived…for a price.

Seventeen-year-old Tempest was born into a world of water. The most skilled diver on the Equinox Reef, she searches drowned cities with her older sister Elysea, seeking out old world treasures to trade for Notes. After Elysea mysteriously drowns, Tempest scavenges the ruins alone, driven to collect enough Notes to buy her sister’s life for 24 hours, and to finally learn the secret she had kept until her last breath.

However, once revived, Elysea convinces Tempest to break her out of the Palindromena research facility and they embark on a dangerous journey to discover the truth about their parents’ death. But they’re pursued by two Palindromena employees desperate to find them before Elysea’s time is up, and to prevent them from uncovering the secrets behind the revival process and the true cost of restored lives.

Dead or living, everyone must pay the price.

Last year I was really excited to receive an unsolicited copy of Four Dead Queens by Astrid Scholte – her debut novel and one with a significant amount of hype surrounding it – so I was very eager to read her sophomore novel. While I didn’t enjoy The Vanishing Deep as much as her debut, I think there were a few interesting things that Scholte did with The Vanishing Deep that show promise for the future.

The Vanishing Deep is the story of Tempest, a young woman living in a world that has been overtaken by the seas. The lone survivor of her family, Tempest works to save enough money to gain entry to Palindromena and to resurrect her deceased sister for 24 hours in order to uncover the secret behind the death of their parents years earlier. Nothing goes quite to plan and the two end up on the run with Lor in pursuit, determined to return Elysea to Palindromena before it’s too late.

I’m going to get my negatives out of the way first – I was not the biggest fan of Tempest, her behaviours or her actions, in this book. As one of the two main POV characters, that’s kind of important to note because she drives the majority of the story. I liked her determination, but found she flip-flopped two much in her relationship with her sister for her character to be consistent. (And yes, I know family can be tough, but this was a lot.)  Tempest is also quite self-important and I don’t think there was enough character growth for her to become more likeable for my own personal tastes in a female lead character.

That said, I did really like Lor, the second POV character. Lor has spent his entire life on Palindromena and is a bit of mystery. We know he hides away from the rest of the island’s population, has very few friends and has taken on an incredible amount of personal guilt for the death of friend years earlier. I wish we’d spent more time with Lor, overall, because his character is fascinating, and the reveal that comes in the last quarter of the book could probably have had more impact if that were the case. I would have easily read an entire book on Lor’s experiences.

I also really liked the world Scholte built up. I have to hand it to her, she knows how to create some of the most fascinating made-up places. A world covered in water that’s buried the old world beneath? Yes, please. And while it was less Atlantis and more potential-global-warming-disaster, it was still interesting. Again, I wish we’d spent more time seeing this world and the impact on the people than we actually got, but the tidbits we did get were great. There was on scene where Tempest describes the salt in their air and how some nights you could got to sleep and wake up covered in crystallised salt. I’m questioning the reality of that, but visually, that’s a really cool picture to paint for your reader.

As for the rest of the book, it was okay. The plot was pretty basic, and being a YA it’s very easy to follow. I think the inconsistencies and my reluctance to connect with Tempest slowed my own personal reading but that may not be the case for others.

I think Scholte has fantastic ideas for new and interesting fictional worlds. I’ll definitely continue to watch her work in the future to see what she does next.

2 Replies to “The Vanishing Deep Review”